The Indiana law promoting discrimination is a new low

Last week, Indiana enacted into law SB 101, the so-called “Religious Freedom Restoration Act.” Apparently, proponents were surprised at the nationwide outcry against the law and they adopted a defensive crouch.

“There has been a lot of misunderstanding about this bill,” the Governor asserts. “This bill is not about discrimination, and if I thought it legalized discrimination in any way I would’ve vetoed it.”

But of course it’s about discrimination! That’s the point of the law. It invites individuals and corporations to violate state and local laws, regulations and rules and claim, as a legal defense in court, that they were following their own religious principles.

On its face, the Indiana law doesn’t mention sexuality. But the measure is aimed at the LGBT community and not others because the state can’t override federal law that protects against discrimination based on race, color, religion, sex, and national origin. While other states are filling the gap between federal and state law, passing LGBT Fairness Acts to prevent discrimination based on sexual orientation and gender identity or expression, Indiana is going in the opposite direction.

How does this work? Indianapolis, Bloomington, South Bend, Evansville, and other cities and counties currently prohibit discrimination on the basis of sexual orientation and gender identity. Under SB 101, individuals and companies can insist that equal treatment of LGBT people violates their religious principles. It would be naïve to think that companies won’t use SB 101 to discriminate, or that individuals won’t be encouraged to discriminate by right-wing organizations that will promise to cover their legal defense.

Conservatives have a fallback argument. Even if the law invites individuals and corporations to discriminate, they ask, why is everybody picking on Indiana? The federal government and 19 other states have passed similar laws, they say.

It is true that other jurisdictions have enacted so-called “religious freedom” laws, but Indiana’s is the broadest and worst.

Media Matters did a good job explaining why the Indiana law is not comparable to the federal statute enacted in 1993 in reaction to a Supreme Court ruling. While the federal law is limited and fairly benign, SB 101 is written very broadly and designed to provide legal ammunition for conservatives in litigation against governments and in private disputes.

The argument that Indiana’s law is the same as 19 other states is propaganda based upon the law’s title and not its contents. (Sadly, the Washington Post repeated that propaganda.) A thorough legal analysis of SB 101’s language can be found here.

SB 101 goes beyond other laws because its definition of “exercise of religion” is unlimited; potential complainants are unlimited (individuals, partnerships, corporations); and it applies to unlimited types of lawsuits.

Last year, the Arizona legislature passed a “Religious Freedom” bill that was similarly overreaching and right-wing Republican Governor Jan Brewer, noting the legislation “could divide Arizona in ways we cannot even imagine and no one would ever want,” vetoed it. Apparently Pence lacks Brewer’s common sense. The new Indiana law invites other states to enact this kind of extreme legislation, and it looks like Arkansas will soon accept that invitation.

Nearly seven score years ago, our nation declared its independence based on the proposition that “all men are created equal,” and a few years later, our founders adopted the First Amendment, guaranteeing everyone the right to religious freedom. These founding documents have served us well. We don’t need SB 101’s religious “rights,” and the idea of using religion to bully others violates America’s fundamental values. 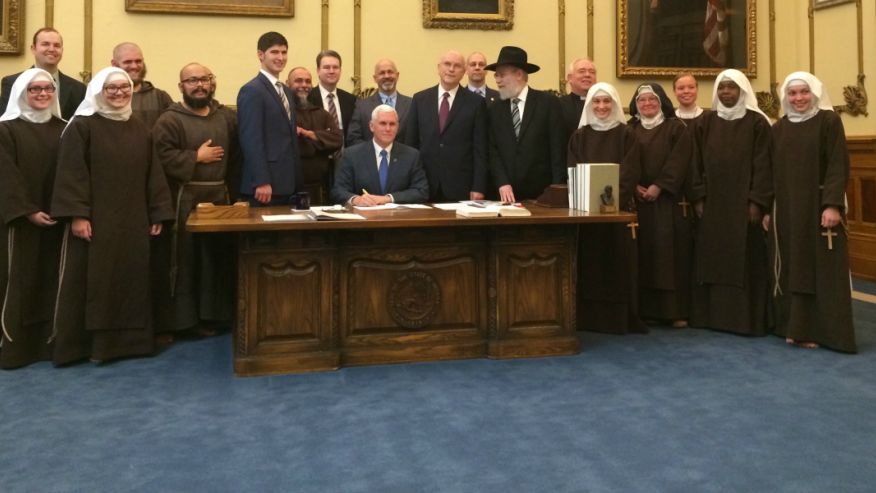 This is the signing ceremony for SB 101. The event was closed to the public—only the bill’s chief advocates were invited.