Call yourself a progressive

A poll by the Pew Research Center compared common ideological terms. It demonstrated that progressive is the most positive political label in America. Conservative is the second most popular political brand. Liberal is substantially less popular, probably because many Americans think that a liberal favors the poor over the middle class. 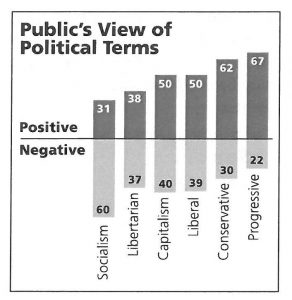 This is not the only poll to draw the those conclusions. A few years ago, Lake Research Partners looked deeply into voters’ feelings about the term progressive. They found that Democrats, Republicans and persuadable voters all like a progressive candidate better than a liberal one. The biggest advantage in the progressive label comes from  persuadables who are 13 points more favorable toward a progressive than a liberal candidate.

As long ago as 1978, I conducted a poll for a state senate candidate that found voters reacted much more favorably toward a candidate labeled progressive than one labeled liberal. But why?

This makes sense. Progressive sounds positive because it comes from the word progress.  It gives the impression that progressives want to move forward, promote innovation and focus on the future—all popular ideas. Also, when progressive is compared side-by-side with conservative, we have an advantage because it sounds like pro versus con. On the other hand, the term liberal no longer benefits from the fact that it derives from the same Latin root as liberty and previously referred to laissez-faire policies. These days, nobody hears liberal and thinks of liberty—the word has lost its emotional center.

In the end, if you don’t label yourself, your opponents will label you. And in 2018 they will call you a “liberal,” a “socialist,” or something even farther afield. Progressive is popular, and more important, it’s not polarizing. Besides, we should be happy to be asked the question, “What is a progressive, anyway?” That gives us the chance to talk about our progressive values: freedom, opportunity and security for all.