Conservatives are lying about crime

Over the past two years, violent crime across the United States plunged to its lowest level in decades. The Justice Department said so on September 20. Bet you hadn’t heard that.

No wonder, since there seems to be only one newspaper article that even mentions it (down in the seventh paragraph), “How bad is crime, anyway?” by Philip Bump.

Here is the truth: 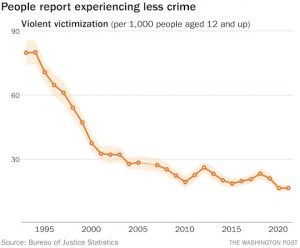 So why are Republicans able to beat up Democrats about crime in state after state (as recently noted by the New York Times and the Washington Post)? They are lying and getting away with it. Importantly, the mainstream media is not pointing out the lies, and neither are progressive organizations or Democratic officials in safe districts.

There are three reasons for this.

The first is that the way the media report on crime is guaranteed to make people think violence is rising. They still rely on the stupid old adage, “if it bleeds, it leads.” Day after day, every horrific crime is made to sound like it’s part of a crime wave. And on those few occasions when real data is released, it is either ignored or skewed. (It is always possible to find some type of crime that has risen, even when the rest have declined. Carjackings anyone?)

The second reason is that right-wing media and law enforcement agencies want to say that crime is rising. It’s their bread and butter. So they say it, over and over and over.

The third reason is that the accurate numbers—based on a survey of about 240,000 Americans, with a margin of error of less than one percent—are released only once a year. The right wing, the police and the media get their mis- and disinformation from a different source of data—“reported” crimes.

Not only do they cherry-pick from that dataset, the dataset itself is skewed. Less than half of crimes are “reported” and much of this is generated by the police “discovering” crimes themselves. It is like one of those online polls where people choose whether or not to participate. Like any self-selected poll, it is emphatically NOT a random sample and, as anyone who has studied statistics can tell you, only a true random sample can accurately describe reality.

On top of that, as The Marshall Project pointed out, “nearly 40 percent of law enforcement agencies around the country did not submit any data in 2021 to a newly revised FBI crime statistics collection program, leaving a massive gap in information….” Garbage in, garbage out.

Look, people’s interest in the crime rate is not academic, it is personal. They want to know if they personally and their families and friends are more or less likely to become victims of violent crime. That’s it. Clearly, people in at-risk communities are disproportionately victimized by crime and that is a disgrace.

But right now, average voters are safer—considerably safer—from violent crime than at any time in memory. And nobody knows it.