4. The Politics of Race, Class and Group Identification

As a candidate and as President, Donald Trump overtly played whites against people of color. He repeatedly attacked Latinos, Muslims, African Americans and Asians.

Among too many examples to cite here, Trump blocked immigration from countries that are majority Muslim and constantly focused on building a wall between the USA and Mexico. He called Black football players sons of bitches, and refused to condemn white nationalists, saying they were defending their “heritage.”

While Trump said these things tactlessly, he was expressing the more veiled right-wing narrative of grievance against nonwhites that has been repeated for decades and which greatly increased in volume during the presidency of Barack Obama.

There is science behind this kind of persuasion. Psychology tells us that a great deal of average people’s self-image comes from their social identity—the group or groups that they see themselves as a part of.

Social identity divides the world into us and them—the in-group and the out-group. The us can be something as unimportant as which football team a person supports. It can be about an individual’s social class or family, college or country. Being part of the group makes people feel good inside. It enhances pride and self-esteem, and usually there’s nothing wrong with that.

But people also enhance their self-image by denigrating them. Individuals can feel good emotionally by blaming, being prejudiced against, or discriminating against their out-group. Obviously, this kind of politics can very quickly turn ugly.

The question is, how should progressives respond to this enormously important challenge? We offer two main pieces of advice. First, tackle race head on and in connection with class and economic populism. As the nation becomes more divided, there are a growing number of Americans of all races who are troubled by it and who want to see more equitable policy solutions. Second, watch your language carefully to make sure you do not reinforce the notion that everything is a zero-sum game. For decades, the other side has used the trope that if we expand rights and implement policies for people of color, whites will get less.

Both race and class are essential in a progressive narrative

If there is one certainty about the foreseeable political future, it’s that the right wing will appeal to bigotry. They will engage in both overt and “dog whistle” appeals to racism, sexism and religious intolerance. Even when a given conservative candidate runs without appeals to prejudice, right-wing PACs and third parties will supply the dirt.

Appeals to bigotry cannot be ignored. Polling has found both our progressive base and persuadable voters agree that talking about race is necessary to move forward toward greater equality, a position that conservatives reject. Use an opening like this:

If you’re not comfortable with direct language, craft something that works better for you. For example, say that our side “puts the interests of working people first, whether white, Black, or brown.” Doing so resonates more strongly with persuadables than simply articulating a positive agenda. And explicitly state that right wingers are trying to “pit us against each other” for their own benefit.

Here are two poll-tested narratives that combine issues of race and class. First:

Such language isn’t going to change the minds of people who are racist and/or who support policies that more deeply enshrine systemic or structural racism. But it can move persuadable Americans who already have some understanding that they’re being manipulated by racially charged language or policies. Perhaps more important, it energizes people in the progressive base who are organizing to hold elected officials accountable and to create a more egalitarian country.

The media continually reassure us that the economy is good, the stock market is strong, and unemployment and inflation are low. And yet, while the rich are getting much richer, average American families are barely getting by. About 60 percent of Americans are living paycheck-to-paycheck; more than 40 percent couldn’t pay for an unexpected expense of $400; on average, credit card holders are carrying negative balances of more than $8,000; and students are leaving college tens of thousands of dollars in debt. In short, only the top 5-to-10 percent of Americans are economically secure. But why?

As demonstrated by the chart below, the long-term benefits of increased productivity—that is, the creation of wealth across the U.S. economy—were fairly distributed to average workers from the post-war period into the Nixon Administration.

But starting in the 1970s and greatly accelerating during the Reagan Administration, real compensation (that is, wages and benefits, adjusted for inflation) stopped rising. While the economy continued to grow at a rapid pace, typical workers no longer received a reasonable share of the wealth they helped to create. Instead, nearly all of that money was, and still is, diverted to the most affluent. 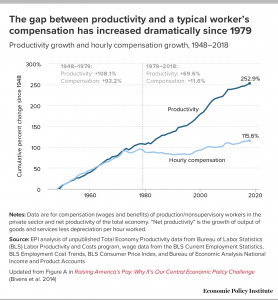 This can also be seen another way. The chart below demonstrates that since the end of the Reagan Administration, the richest 10 percent of Americans doubled their wealth while the bottom 90 percent gained only slightly, and the bottom half—which own just one percent of all the nation’s assets—gained nothing.

Today, the richest one-tenth of one percent of Americans (fewer than 200,000 families) own about the same amount of private wealth as the bottom 90 percent (about 110 million families) combined. The three wealthiest Americans own more assets than the entire bottom half of the U.S. population. And just 26 people own as much wealth as half of the world’s population (that is, 3.8 billion people) combined.

While conservatives assert it was just normal functioning of “the market,” the redirection of wealth to the wealthy was consciously accomplished in myriad ways, large and small. Management pay was exponentially increased, workers’ benefits were minimized, key government regulations were amended or abolished, taxes were evaded, unions were destroyed, corporations sent factory jobs overseas, businesses cut costs by minimizing customer service and instead making their customers do part of the work, and most recently, Wall Street embraced money-making schemes that were little more than scams. The wealth that all Americans created together didn’t just passively flow to the rich, they actively took it for themselves.

If this sounds to you like a harsh assessment, we urge you to read about it yourself. It is essential to understand what underlies the populist uprising that fueled both the Trump and Sanders campaigns in 2016. Without knowing any of the details of these charts and statistics, typical American workers feel that they have been treated unfairly, that their families are worse off than they were some decades ago, and somebody is to blame for it. And, in that at least, they are right.

Obviously the right-wing media, owned by and operated for the rich, are not going to talk about this concentration of wealth. But neither will the mainstream media. Thus, the economic truth is both unseen and unheard—it remains hidden in plain sight—and, as such, it can trigger Americans to blame people of color, immigrants, low income workers, and others, rather than the real culprits.

For at least a decade, virtually every poll has shown that, if they hear the argument, persuadable voters will agree that the rich deserve blame. For example, among American voters:

Nevertheless, Barack Obama rarely made this point as President and Hillary Clinton largely avoided it as a candidate. So, the partisan debate on economics—what was heard by voters—was quite one-sided. That simply cannot continue.

This is an easy message to deliver because Americans already believe our narrative, if only we will say it. And there are many ways to communicate it effectively. For example:

So, pretty obviously, you need to emphasize that conservative policy supports the rich while progressive policy supports the middle class. That does not mean you should lessen your commitment to fight poverty or move your policies to the right, it means you should focus attention on the fact that your economic policies benefit the middle class while conservative policies don’t.

The narrative above uses simple, non-ideological language to express that idea. The first sentence expresses agreement. If you know something specific about your audience’s economic woes, use it. Do not imply that the economy is okay because you will likely get a very angry response. The third sentence was used by President Obama and polls extremely well.

This is another version of the same theme:

Here are some additional phrases that work:

These narratives and messages appeal to just about every persuadable voter without sounding ideological. That’s important because most voters think that “free enterprise has done more to lift people out of poverty, help build a strong middle class, and make our lives better than all of the government’s programs put together.” So don’t attack capitalism, condemn economic unfairness.

Voters feel good about corporations and businesses—most work for one. Voters believe that businesses create jobs and America needs jobs. Americans especially adore the concept of Main Street. And as pollster Celinda Lake says, “Americans are in love with small business. It’s a concept that voters see as almost synonymous with America.” By small business, they mean family-run businesses with five or perhaps ten employees.

Understand that the rich, or the major banks and corporations, are not unpopular for who they are, but for what they’ve done. To be effective, you need to connect the bad guy to the bad deed, such as unfair tax breaks, moving jobs overseas, accepting bailouts, or paying outrageous CEO bonuses. Americans expect some people to earn more than others. It’s not income inequality that voters oppose, it is economic injustice, economic unfairness and people who cheat or rig the system.

If you attack the market system, you marginalize yourself. In addition, there are a lot of economic phrases that, in the minds of most Americans, may mean something different from what you intend. Don’t say capitalism, socialism, or fascism because the far-right has succeeded in confusing voters about their meaning. Don’t use the phrases free markets or free enterprise because, in this context, “free” triggers positive thoughts about conservative economics.

And yet, you should explicitly support a fair market system. You need to draw a distinction between conservative anything-goes economics and a progressive system that enforces basic rules-of-the-road to level the playing field and keep markets honest and fair for everyone.

The argument for capitalism is that by harnessing individuals’ economic drive, all of society is enriched by their hard work and innovation. Progressives are for that. But society does not win—in fact, it loses—when people get rich by gaming the system, by exploiting tax or regulatory loopholes, by dismantling viable companies, or by creating scams that aren’t technically illegal but should be.

Conservatives relentlessly warp markets to benefit the rich and powerful. They use subsidies, loopholes, trade policy, labor law and economic complexity to corrupt markets. It is progressives who seek to build fair markets. Help voters visualize such a system.

When you talk about the American Dream—fair pay, health insurance, homeownership, education, retirement security—it provides the opportunity to explain that none of this is possible without a change in direction. It lays out an overarching goal; only progressive policy will ever get us any closer to turning that Dream into a reality.

Finally, when talking about economics, don’t limit the conversation to income inequality. In our country, the biggest inequalities involve assets.